February 2017 – LIQUI MOLY exports to more than 120 countries. Some of these you wouldn’t necessarily think capable of generating much revenue at first sight, but the oil and additive specialist is achieving high sales revenues there. LIQUI MOLY proprietor and CEO Ernst Prost puts this down to a combination of quality made in Germany and local knowledge.

Iraq, Turkmenistan and Algeria are among LIQUI MOLY’s key export countries – not exactly classic growth markets.
Ernst Prost: And that’s precisely one of the reasons for our success. Let’s take Iraq, for example: parts of the country are still occupied by ISIS, in recent years there have repeatedly been outbreaks of violence verging on civil war and purchasing power is far removed from the levels of European prosperity. This is why many of our competitors prefer not to go anywhere near the country. But in fact Iraq offers significant opportunities. It’s just a question of tapping into them. In 2016 we achieved sales of five million euros in Iraq.

How is that possible?
We combine quality made in Germany with local knowledge from our Iraqi importers, with whom we collaborate closely. They know their country much better than we do and we give them a lot of freedom in marketing our oils and additives. We would never dream of managing our marketing operations there on a centralized basis from Germany. You'd be doomed to failure if you tried. We see our job as giving our importers whatever they need for successful marketing. And we stick with them. I have enormous respect for our customers in crisis-stricken and war-torn areas who do an excellent job despite the adverse conditions. We carry on even when the going gets tough – loyalty and partnership are more important to us than making a quick buck. And ultimately, this attitude pays off financially in the long run, too.

Is the product range in these countries different from that of Germany?
No. As a general rule we offer our complete range in all countries. But of course the range of vehicles is different and so is demand.

Is LIQUI MOLY mainly looking for niche markets like Iraq to be able to continue growing?
Certainly not. We have much too much growth potential in the major markets for that. Competition is tougher in the latter but that doesn't put us off – in fact it’s an incentive. Our strong growth in the USA and China illustrates my point.

It sounds as if there were no such thing as a difficult market.
Well, that’s not true of course. Every market has its obstacles. Japan is a very demanding market, for example. That has to do with the culture, but also the legal parameters. We’re having a hard time there at the moment. That's why we’ve now recruited Japanese industry experts to help us expand our share of the market there.

About LIQUI MOLY
With around 4,000 items, LIQUI MOLY offers a global, uniquely broad range of automotive chemicals: Motor oils and additives, greases and pastes, sprays and car care, glues and sealants. Founded in 1957, LIQUI MOLY develops and produces exclusively in Germany. There it is the undisputed market leader for additives and is repeatedly voted the best oil brand. The company led by Ernst Prost sells its products in more than 120 countries and generated 489m euros in sales in 2016. 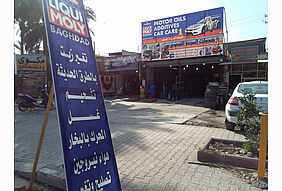