Oil manufacturer continues its involvement in motorsports in the region

March 2018 – The German oil and additive specialist LIQUI MOLY will remain an official partner of the TCR Asia touring car racing series in the 2018 season. "This shows how strongly we are rooted in motorsports," says Peter Baumann, Marketing Manager at LIQUI MOLY.

"We have accompanied the TCR racing series from the start, since it began in 2015," says Peter Baumann. Under the umbrella of the global racing calendar regional and national offshoots of the series were created, including TCR Asia. This localization concept has shown itself to be very successful.

In TCR Asia the oil and additive specialist has already been present with LIQUI MOLY Team Engstler. The team won the team ranking by some distance in both of the past two years. In 2017, its driver Kantadhee Kusiri from Thailand won the overall ranking and in 2016, it was its driver Andy Yan from Hong Kong. "The fact that we are not only participating with a team, but also once again as official partner of the entire series this year, underlines the importance that the entire region has for us," says Peter Baumann. Asia is one of the growth regions of the company.

Here LIQUI MOLY is counting on the media presence of the series. Advertising banners on the course bring the logo of the oil manufacturer onto viewers' screens. Plus, LIQUI MOLY is included in the series communication: In printed material and on the website, on Facebook and on YouTube. "This helps our brand awareness in the region," says Peter Baumann. "We will also use TCR Asia to invite customers and to show them how our products cope under racing conditions."

In TCR Asia close-to-production vehicles drive in the Touring Car Championship. No works teams of the car manufacturers are allowed. The series comprises five faces in Malaysia, Thailand, South Korea and China. The first race begins on 30 March in Sepang, Malaysia. 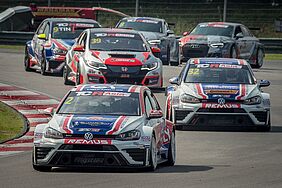