September 2020 – Touring car fans have had to exercise patience: At long last, the WTCR World Cup starts this weekend. The Engstler Hyundai N LIQUI MOLY Racing Team will also be there. This is the first time that the oil and additive specialist LIQUI MOLY has partnered with a works team in motor racing.

Together with the Engstler Racing Team, LIQUI MOLY has been involved for years in the national and international offshoots of the TCR touring car championship. There have also been individual appearances in the WTCR World Cup. This year, for the first time, a complete WTCR season will be contested. However, due to the Covid-19 pandemic, this is only now starting after a delay. In return, touring car fans can look forward to a closely packed racing calendar: 16 races in two months.

Touring car veteran Nicky Catsburg from the Netherlands and Luca Engstler from Germany will be driving for the Engstler Hyundai N LIQUI MOLY Racing Team. The latter, despite only being 20 years old, has already achieved several podium finishes in the TCR. Both drivers will compete in a Hyundai i30 N TCR.

The cooperation between Hyundai and LIQUI MOLY is reflected firstly in the clearly visible presence on the vehicles and secondly in the fact that the two Hyundai i30 N TCRs run on LIQUI MOLY oil. It is the Synthoil Race Tech GT1 10W-60, a fully synthetic oil that has been specially developed for use on the race track.

LIQUI MOLY not only supports the Engstler Hyundai N LIQUI MOLY Racing Team, but is also an official partner of the WTCR racing series. The blue-red logo will therefore be visible both on the Hyundai i30 N TCR and on the race track. 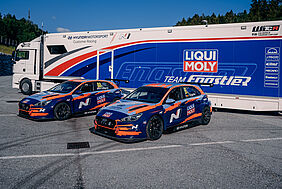