More than 4000 participants in #MyLiquiMoly-Moment competition

A great moment for Markus J.: the Austrian wins the Hyundai i30 N in the #MyLiquiMoly-Moment competition. His picture was drawn from more than 4000 entries from all over the world.

Luca Engstler, driver for LIQUI MOLY Team Engstler in the TCR International Series and Peter Baumann, Marketing Director at LIQUI MOLY, handed over the new Hyundai i30 N in the LIQUI MOLY racing design to Markus J. from Austria in Ulm on the lubricant manufacturer’s factory premises. Markus J., who arrived the day before with his sister from his hometown 700 kilometers away, was overjoyed about his win: “I still can’t really believe it. It’s fantastic!” The mechanic and car enthusiast can now feel like a real racing driver at the wheel of his new i30 N. The 25-year-old learned about the lubricant brand’s competition on Facebook. “I’ve been faithful to LIQUI MOLY for some time now and naturally I follow the content for professional reasons too.” Markus J. did not hesitate for long, sent in his LIQUI MOLY Moment and kept his fingers crossed. “My current car – an old Peugeot 106 – has already been around for a good few years, as you can see on my winning picture.” This shows how his Peugeot “drinks” motor oil from a LIQUI MOLY barrel with an oversized straw on a mild summer evening. Markus J. is seen sitting with his own drink next to the 106, like a buddy. “Yes, the Peugeot has been with me a long time now. It’s my work car. But I’m not going to discard it, despite my win. The Hyundai i30 N will be my weekend car for now. It’s simply too good for everyday driving. But today I’m looking forward to the ride home.”

The competition is part of the big Best Brand Campaign 2020. Over a period of seven months, the lubricant specialist is giving away attractive prizes. The competition with the car in the striking design started in June. The Hyundai i30 N is the basis for Luca Engstler’s racing car for LIQUI MOLY Team Engstler. Fans of the brand worldwide were called upon to photograph and send in their LIQUI MOLY Moment. In response, more than 4000 pictures from all over the world reached the German oil and additive producer. A jury selected the best 150 pictures from the entries. Then the winner was drawn by lot. The next competition, which is all about the MotoGP motorcycle series, is already in the starting position.

LIQUI MOLY and Luca Engstler congratulate Markus J. on his prize, and wish him good and safe driving at all times. 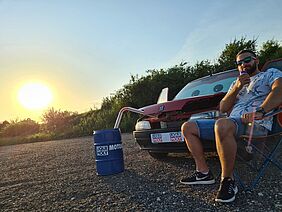