August 2018 – Wear is a natural enemy for any engine. Metal rubbing against metal is the quickest way to wear out an engine. It shortens the service life and drives up repair costs. LIQUI MOLY protects engines. For this purpose the additive specialist from Germany offers three powerful agents: Oil Additive, Motor Protect and Cera Tec.

Oil Additive is still an excellent additive for older vehicles today. It was the first product from LIQUI MOLY, when the company was founded in 1957. This engine oil additive contains MoS2. MoS2 is a solid lubricant, similar to graphite. "It forms a protective layer on the metal surface, preventing direct contact between adjacent metal surfaces in the engine," says David Kaiser, Head of Research and Development at LIQUI MOLY. "This is particularly important immediately after starting the engine, before the motor oil has circulated to all points in the engine." Moreover LIQUI MOLY Oil Additive improves the emergency running properties, ensuring that the engine is protected against pistons seizing up when the lubricating film tears off. MoS2 is black, giving the entire additive a very dark color. When added to the motor oil, it also becomes dark. The motor oil may have the appearance of old, used oil, but, in this case the dark color is a sign for effective wear protection. The Oil Additive has proven itself in cars around the world for over 60 years.

While the solid lubricant in LIQUI MOLY Oil Additive reduces friction in the engine physically, LIQUI MOLY Motor Protect accomplishes this function chemically. It contains so-called friction modifiers, which have a smoothing effect on the metal surfaces with which they connect in the microscopic area. Motor Protect is suitable for state-of-the-art cars and is intended for users who want a wear protection additive not containing any type of solid lubricants whatsoever.

Oil Additive protects physically, Motor Protect chemically - and LIQUI MOLY Cera Tec combines both of these strategies. It, too, contains "friction modifiers” for chemical protection. And it also contains solid lubricants for physical protection. These consist of microscopic ceramic particles, which give the additive a beige color. They are so small, that they can easily pass through the oil filter. "This double protection makes Cera Tec a highly effective additive, the effect of which lasts for up to 50,000 kilometers," says David Kaiser. "This makes it particularly economical to use." It is the first choice for newer vehicles.

All three additives reduce friction in the engine. This reduces the engine temperature and even lowers fuel consumption a little. Furthermore, the engine is better protected under extreme loads. And, after all, less wear means a lower risk of repair and a longer service life of the engine. David Kaiser: "This means the additives not only protect the car, but also its owner's wallet." 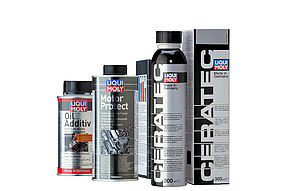