October 2016 – The crowning achievement of a successful season: Andi Yan from Hong Kong clinched the title of the TCR Asia. The LIQUI MOLY Team Engstler driver won the race in Malaysia and thereby secured the title ahead of time in the Touring Car Championship. "I have to thank my team who worked through the entire night after we had technical problems in the first race," says Andi Yan.

Thanks to the victory in Malaysia, Andi Yan secured such a large points advantage with his VW Golf GTI TCR that nobody will be able to catch his lead at the top of the rankings at the final in Macao in November. Another title for the repeated winner of the Chinese Touring Car Championship. The early title victory might not have been a sure-fire success, but it certainly stood out. The success in Malaysia was his fifth victory in eight races.

Team colleague Filipe de Souza from Macao is currently in third place in the overall rankings and hopes to be able to move up a place at his home-race in November. With the two successful drivers, the LIQUI MOLY Team Engstler is also in first place in the team rankings. 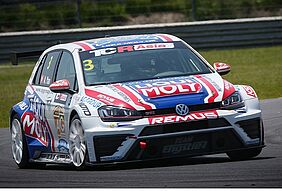