January 2018 – The range of boat products offered by oil and additive specialist LIQUI MOLY continues to grow. It is now launching Marine High Performance Gear Oil 85W-90 – a new transmission oil mainly designed for Mercury motors. This protects the transmission from corrosion when water gets in. The new transmission oil will be presented for the first time at the watersports trade show “Boot” in Düsseldorf.

Marine High Performance Gear Oil 85W-90 has been specially developed for the marine sector. After all, boat engines face a problem that does not apply to land vehicles: water in the transmission. When left to stand for lengthy periods, the water separates from the transmission oil and accumulates. A layer of water forms that can lead to corrosion, ultimately causing transmission problems and reducing the service life of the transmission. Marine High Performance Gear Oil 85W-90 by LIQUI MOLY has much better emulsifying properties than conventional transmission oils, while still ensuring stable lubrication. The emulsion also lasts longer before separation occurs. This means it keeps the water dissolved in the oil so that it cannot separate. The oil continues to provide reliable lubrication in spite of the water dissolved in it.

In addition, Marine High Performance Gear Oil 85W-90 exhibits excellent corrosion protection and is particularly resistant to aging, which makes it an excellent choice for outboard motors that may sometimes not be used for lengthier periods. It is especially well-suited for use in Mercury outboard motors with an output of over 75 hp, as well as MerCruiser Z-drives. The product also meets the requirements of other popular transmission manufacturers in the marine sector such as Honda and Yamaha. What is more, it can be used as a substitute for an SAE 90 transmission oil.

Not only does the new transmission lubricant offer a wide range of functions, it also has a striking color: it is blue – the typical color of Mercury oils and therefore a visible identifying feature for many boat enthusiasts and mechanics. LIQUI MOLY also supplies the appropriate equipment to go with the new product in the form of a high-quality transmission oil pump.

At the trade show “Boot” the company will also be presenting its Marine Universal Cleaner and the concentrate Marine Universal Cleaner K. These remove algae, oil and grease residue, soot, bird droppings and insect residue from sails, decks and hulls. They also diminish the electrostatic attraction of dirt particles to plastic surfaces, thereby reducing adhesion and facilitating removal. Both cleaners are not just highly effective but also very environment-friendly: they are 95 and 92 per cent biodegradable respectively.

The trade show “Boot” takes place from January 20 to 28 in Düsseldorf. LIQUI MOLY can be found in Hall 10 at Booth F18.

Match Race Germany GmbH will be using the booth as the forum for a press conference on Thursday, January 25, starting at 11 am. Among other things, the organizers will looking ahead to the match race to be held in Langenargen by Lake Constance from May 16 to 21. This is one of the most foremost sailing races in the whole of Germany, its unusual feature being that two boats always compete directly with one another. 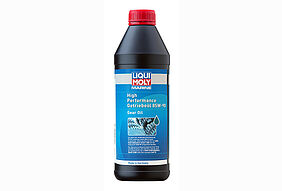