July 2016 – LIQUI MOLY is launching a new special oil on the market for the latest models by Volvo: Special Tec V 0W-20. It is officially approved by Volvo. With a viscosity of 0W-20 it is a highly fluid oil, which reduces fuel consumption and quickly and reliably lubricates all parts of the engine even when starting in winter.

Official oil approvals by Volvo in the car sector have not existed for very long. Previously Volvo used only industry standards such as ACEA and refrained from releasing its own, more extensive regulations for motor oil. But now Volvo is following the same strategy as Volkswagen, BMW and Mercedes have been following for many years: Making very detailed provisions on which properties the motor oil should have. The background is that the oil and its properties are a part of the development of a new engine and modern engines reactive very sensitively to the wrong oil.

In the Special Tec series by LIQUI MOLY those oils that are suitable for a special, particularly limited vehicle fleet are united. The following letter signals which brand the oil was developed for: Special Tec V for Volvos, Special Tec F for Ford and Special Tec F Eco for the Eco Boost engines by Ford. 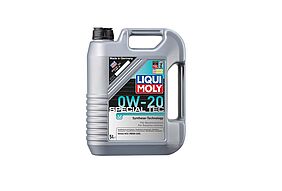