April 2016 – LIQUI MOLY is back in handball. The German oil and additive specialist is lending its name to the final tournament of the EHF Cup. On May 20 and 21, the four best club teams of the Europe-wide competition will face one another. "As an international tournament, it fits in very well with our strategy of making the LIQUI MOLY brand even better known outside of Germany," says Peter Baumann, Marketing Manager at LIQUI MOLY.

The EHF Cup is a competition of European handball clubs and is comparable with the Europa League in football. LIQUI MOLY is no newcomer to international handball. The company has previously advertised at European and World Championships and at international games. Handball is considered one of the fastest team sports in the world and generates a lot of audience and media interest. "This is particularly the case for such top-level tournaments as the final of the EHF Cup. That's why we have decided to lend our name to this event," says Peter Baumann.

For David Szlezak, Managing Director of the European Handball Federation (EHF) Marketing GmbH the cooperation is a clear sign: "The involvement of a large international company such as LIQUI MOLY at one of the top events of the EHF underlines the attractiveness of our club competitions on the German market as well as the positive development of the EHF Cup final since the introduction of the tournament in 2013."

Along with the title rights, LIQUI MOLY is also advertising in advertising spaces relevant to television on digital hoardings on the side of court and on the floor of the court itself. 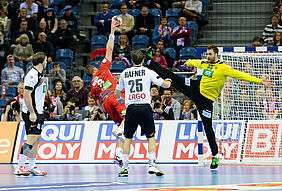