Photoshoot as a publicity magnet at Swiss Moto

February 2018 – In Switzerland, LIQUI MOLY continues to promote its motorbike business. A clear sign for this is its own exhibition booth at Swiss Moto in Zurich. "Our cooperations are bearing fruit. Now we want to give our brand an even bigger stage and the biggest motorbike exhibition in Switzerland is the best forum in the country," says Carlos Travé, General Manager 2-Wheel for the German lubricant specialist, who is striking a new path for this.

Located in Hall 1 / C02, LIQUI MOLY will present its motorbike range in its own area; including new additions such as the Motorbike MoS2-Shooter additive, which reduces friction in the motor and protects it against wear, the Foam Filter Cleaner, a mineral and fully synthetic shock absorber oil and a whole series of new motor oils, including Motorbike 4T 5W-40 HC Street. "We offer bikers and garage owners a complete range of two-wheel chemistry including our own garage concept for motorbike garages. This abundance is what sets us apart in the industry. And we exhibit this variety with appropriate prominence each year in Zurich," says Carlos Travé.

The Rhiag Group from Baar will also be present there with its personnel. The exclusive importer of LIQUI MOLY products for Switzerland is also promoting its business with the motorbike products of the German vehicle chemistry specialist and is creating its own 2-wheel team.

Because the LIQUI MOLY booth will be directly connected to the neighboring Polo motorbike, a palpably larger area is created and therefore a really big exhibition booth. "This new way in outdoor advertising demonstrates our close cooperation beyond Swiss Moto and offers both exhibitors and the visitors added value," explains the globally responsible 2-wheel manager.

Visually this connection will also be reflected with a shared bar for sales discussions and an oversized Moto-GP theme, characterised by LIQUI MOLY. Since 2015, the company has been the official lubricant supplier of the Moto 2 and Moto 3 series and, until 2020, is also represented at the Moto-GP with advertising banners on the race tracks. "There is a special fascination with the most successful motorbike racing series in the world, which is why it is an integral part of both exhibition booths, above all of ours," says Carlos Travé. Even though circuit races are banned in Switzerland, the enthusiasm for motorsports is unwavering there and the country is represented by several riders in the Moto-GP.

This fascination for motorbike sports is also taken up by LIQUI MOLY in another way at its exhibition booth: There visitors can have themselves photographed with a motorbike of the Intact-GP team, sponsored by LIQUI MOLY, and with the exhibition hostesses, for a personal souvenir.

The LIQUI MOLY colors are also once again held aloft by partner JB Töffhandel GmbH from Happerswil. At its exhibition booth in Hall 2 / B20 it is giving the lubricant partner a lot of space. 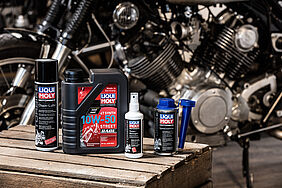