April 2017 – Nowadays radiators are highly cultivated systems that react exceptionally sensitively to impurities. Often it is the water pump that then gives up the ghost. Yet this is easy to avoid: with the LIQUI MOLY radiator cleaner, which reliably removes deposits and dirt from the cooling circuit.

The work that radiators have to do nowadays is constantly growing. Downsizing and weight reduction mean that ever smaller and lighter coolant pumps have to discharge large quantities of heat, occurring in the full-load operation of the small motors. "Plus, significantly higher revs are being driven at the coolant pump than is the case in proven systems," explains David Kaiser, head of Research and Development at LIQUI MOLY. Active thermal management of the motors also leads to the pumps sometimes being switched off during vehicle use, which fosters the formation of slime and deposits in the cooling system.

"This is as if you were to change for dinner, but not wash your hands. That's why it is so important to clean the cooling system every time the radiator is worked on," recommends David Kaiser. This is easy and affordable with the LIQUI MOLY radiator cleaner. It is simply added to the cooling water, the radiator is switched on and the motor left to run. The active ingredients then dissolve deposits, slime and dirt. After 10 to 30 minutes these are drained together with the old cooling water and the system is rinsed with water. Now it is clean and can once again deploy its full output. Also, the service life of the water pump is increased and problems with the cooling system are prevented.

"For the same reason, the cooling system should also be cleaned when the radiator is replaced," says David Kaiser. It is generally older vehicles in which the radiator is so heavily corroded that it has to be replaced. The damage is made worse by car owners that do not fill it with distilled water, but instead use tap water, and do not even use antifreeze. The consequence: Even more corrosion, even more impurities in the cooling water.

"If only the radiator is replaced, then deposits and slime remain in the system and will continue to cause problems in the future," says David Kaiser. Here, too, the entire system should be freed from dirt with the radiator cleaner by LIQUI MOLY. This is a simple measure that results in consistent success. David Kaiser: "Cleaning is a part of every professional job on the cooling system." 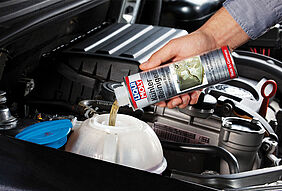