March 2018 – The M Developments team is hoping to create a new conversation and following for this class of racecar. Driver Barry Moore couldn’t be happier with the interest and discussion generated since the TCR landed in New Zealand at the end of last year with the support of their principal sponsors, Mitchell Mackersy Lawyers and LIQUI MOLY.

This vehicle is the first of its kind in Australasia, TCR Chassis 002 from Volkswagen Motorsport, previously run by LIQUI MOLY Team Engstler in TCR-Asia with two championship titles under its belt. The TCR class is internationally known, and multiple regional series and the WTCC (World Touring Car Championship) have adopted the TCR category guidelines.

“It makes for a better race,” Moore said. “A TCR is affordable for teams who want to run in that class, the cars have a great presence on the track and the racing is highly competitive making it great for fans to watch. A TCR class is more evenly matched, which then comes down to the driver talent to take a win home.”

“We’re ready to be at the forefront of this conversation. We want New Zealand and the motorsport community to get behind this class of car. We believe as more people understand the financial and competitive benefits, the more desire they will have to move towards TCR as a class of racing in New Zealand.”

“TCR class cars can also be used in various other motorsport classes throughout New Zealand and have proven themselves overseas to be competitive against the higher priced GT4 machinery,” Moore said.

Barry Moore and Co-Driver Tim Mackersy will be racing the Volkswagen Golf GTI TCR on March 24th in the 3-hour race of the National Endurance Championships at Pukekohe Park Raceway. 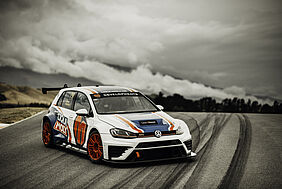 Motoröle und Additive
Made in Germany

Motoröle und Additive Made in Germany