December 2016 – The German oil and additive specialist LIQUI MOLY is using the winter break to introduce two new marine oils on the market: Marine Single Grade SAE 30 as well as Marine ATF. “This is another step in consistently expanding our range of marine products”, said Jan Volk, responsible for the Marine Sector at LIQUI MOLY.

Marine ATF is an oil for automatic gearboxes and can also be used in reversing gears, power steering systems, control systems, trimming systems, hydrostatic transmissions as well as in hydraulic and mechanical systems requiring ATF. LIQUI MOLY Marine ATF provides better corrosion protection and reduces wear to a higher degree than conventional ATF oils. This provides performance reserves, which pay for themselves under extreme conditions of use as well as long standstill times. Marine ATF from LIQUI MOLY carries a number of Dexron approvals and is suitable for an wide range of ZF gearboxes

By contrast the Marine Single Grade SAE 30 is the opposite of a high tech oil. It is a classic, mineral-base, single grade oil, intended for older marine engines - running on petrol as well as diesel fuel. Moreover it can be used in gearboxes requiring SAE 30 oil.

“These two oils are the last two new products for boat owners this year”, continued Jan Volk. Although LIQUI MOLY will be launching its marine range in January, the oil and additive specialist has been expanding its range from the very beginning. For example this year a special two-stroke oil was developed for DFI engines. “And for 2017 we are already preparing the next new products.” 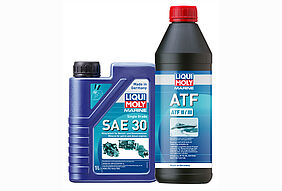