The fairytale of a single oil for all cars

LIQUI MOLY explains why there are so many different motor oils

July 2018 – Many, many years ago it was easy: You did not have to worry about the right motor oil because the same oil was suitable for almost all cars. This is totally different today. Oliver Kuhn, deputy manager of the LIQUI MOLY oil laboratory, explains why there is no longer a universal motor oil.

In the past it was almost irrelevant which oil you poured into the engine: There were hardly any differing sorts of oil and the car tolerated almost everything. Later there were more oil types, but the various viscosities such as 10W-40 or 15W-40 still offered some orientation. This describes how thick or thin the oil is in cold and hot conditions. But today the viscosity is just one of many important properties and offers little help in the search for the right oil, says Oliver Kuhn.

Industry standards are decisive for the motor oil today, such as those by the European Automobile Manufacturers' Association (ACEA) or the American Petroleum Institute (API). Furthermore, especially European car manufacturers have developed their own oil specifications. "Overall there are currently more than 50 specifications for motor oil," explains Oliver Kuhn.

But what happend for the jungle of oil types to keep growing like this? In their efforts to reduce fuel consumption and therefore also emissions, especially European car manufacturers discovered motor oil to be one of many adjustment screws. When they develop a new engine, the properties that the oil should have are set out early on. It is then up to the oil manufacturers to develop such an oil. Because each car manufacturer follows a different technological approach, the required oil properties deviate from one another. Sometimes numerous properties can be combined in a single oil, but sometimes not.

This means that the general lubricant from previous decades has become a highly specialized liquid. And what's why there cannot be a universal oil today that fits all vehicles. "Anyone who says otherwise either doesn't know what they are talking about or wants to take you for a ride," says Oliver Kuhn. LIQUI MOLY produces exclusively in Germany and has the right oil for practically every car.

The question of the "best oil" can therefore not really be answered in general terms. Instead it is a question of using the right oil for each car. Today, motor oil is like a liquid replacement part. Putting in the wrong oil is like fitting the wrong replacement part. This threatens dangers that go beyond a little oil sludge. There are actually oil-engine combinations that destroy the engine after just a few hundred kilometers. Which oil is right for a vehicle can be found in the handbook or the online oil guide at www.liqui-moly.com. Simply enter the make, model and engine to obtain a list of the right oils.

A change in trend towards fewer oil types is not on the horizon. Quite the opposite: In future the variety of oils will grow even further and the trend towards ever more specialized oils will continue. "This makes life more complicated for car drivers and mechanics alike," says Oliver Kuhn. "Fewer oil types would, of course, be easier for us as a manufacturer, too. But this development is being advanced by the car manufacturers, not by us." 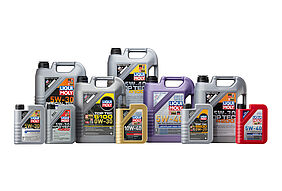