Motor oils, additives – more or less inconspicuous liquids in barrels, canisters and cans that perform their service in the car without a lot of fuss. Far from the limelight of glamorous vehicle presentations. How sensual a 10W-40 motor oil can be is shown by the photo models in their six-day "internship" at the two LIQUI MOLY factories in Germany.

Where protective goggles, gloves and safety shoes as well as ear protection are indispensable in everyday life at LIQUI MOLY, an exception was gladly made for the "interns". For example, in the laboratory: normally motor oils and additives are developed there using a variety of ingredients. For the calendar, the models are the main ingredient for thrilling themes. For once they were also allowed in places that are normally out of bounds: on the storage tanks. The women in light outfits were photographed in light conditions. They also got a look at production planning and received deep insights in the pictures themselves. In the high gloss themes the colleagues even manage to give tidying and cleaning jobs a playful gloss. 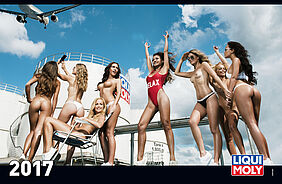