Ten years of passion, dedication, sweat, and hard work - the Intact GP team didn't just look back on its past on Friday, 25th of November 2022, rather the Memmingen-based racing team presented its new colours as the LIQUI MOLY Husqvarna Intact GP team for the 2023 season while celebrating and reminiscing with many companions.

For the first time since 2019, the Intact GP team invited guests to Memmingen, the small, tranquil town in the heart of Bavaria, not only to celebrate the magnificent successes of 2022 and the last ten years, but also to present the new rider constellations that will compete at world championship level under the new name LIQUI MOLY Husqvarna Intact GP. For the first time, the event was not held in Keckeisen's own halls, but in the Kaminwerk, a concert hall that offered enough space for the anniversary celebrations.

Even the mayor of the city of Memmingen, Manfred Schilder, did not miss the opportunity to say a few welcoming words to the guests and the team that makes his city famous in the (racing) world.

The more than 500 guests present celebrated the recent successes, such as Dominique Aegerter's fantastic MotoE World Cup win and Lukas Tulovic's Moto2 European Championship title, and were also introduced to the new recruits of the expanding team thanks to Servus TV presenters Eve Scheer and Alex Hofmann.

But before that, the three founding members of the Intact GP team, Jürgen Lingg, Stefan Keckeisen, and Wolfgang Kuhn, were proud of their racing project, which has been reaching new heights year after year since 2013. For a decade now, the trio has proven that their passion, unbroken enthusiasm, and great commitment make dreams come true. In the process, they have gone through many ups and downs, but have acquired an expertise that is highly respected in the scene and always attracts young talents. They have been supported on their way by partners who have been on board for ten years.

LIQUI MOLY has played a big part in this, confirms Marketing Director Peter Baumann: "It's something special when brands work together with a team for so long. It certainly doesn't happen all that often in this form, but it's no coincidence. LIQUI MOLY has been the namesake of this team for many years, so we are really deeply rooted within it. It's very coherent for everyone, even now that Husqvarna has joined as an important partner. After ten years, the new Moto3 team is another piece of the puzzle that fits perfectly into the structure and paves the way for the next decade. It also brings a lot together, because it's not just a matter of the heart. It's a great cooperation, the team's return on investment for us as sponsors has always been guaranteed in the best possible way, and when the personal relationship is also right and the sport is breathtaking, then it's an ideal situation for everyone involved. We are all the more pleased that we, as the LIQUI MOLY brand, can continue to be part of this team until at least 2027."

Their story began in 2013 with German-Italian Sandro Cortese after he won the Moto3™ World Championship title in 2012. Just three seasons later, Intact GP became a two-man team, joined by Bavarian Jonas Folger, who promptly took the first win for the Moto2™ racing team in the same year, at Brno in the Czech Republic. Marcel Schrötter was later signed as another German talent and Switzerland also became part of the Intact GP family thanks to Tom Lüthi, Moto2 Vice World Champion in 2016 and 2017. In 2019, together with Schrötter, he took eleven podium places in the racing team's most successful season to date and thus second place in the team standings. The double podium in Qatar and the unbelievable double victory in Austin remain unforgotten, which everyone was able to enjoy once again to the full thanks to the flashback videos.

In addition to sponsors, friends, and other companions, almost all 40 team members were present - from the Junior Team and the new Moto3 Team to MotoE and Moto2. Moto2 European Champion Lukas Tulovic spoke in an interview about his career highlights so far as well as the goals and ambitions for his mission in the Moto2 World Championship.
Another highly decorated title holder then took to the stage and was equally frantically celebrated for winning the 2022 MotoE World Cup. Dominique Aegerter leaves big shoes to fill for Randy Krummenacher and Hector Garzo, who will take up his legacy in the all-electric class, but these two riders can't wait to put their ambitious words into action either.

In the Moto2 team that once started it all, Darryn Binder and Lukas Tulovic will fight for glory in the 2023 season, while in Moto3 Collin Veijer and Ayumu Sasaki want to contest the crown in the lightweight class. Their interviews in front of a full house were followed by the most eagerly awaited moment of the evening: the unveiling of the 2023 machines, which are to shake up the respective world championships in their new guise,  of course again with the help of all products from our Motorbike range. 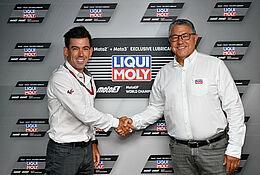