Team Hahn Racing starts full speed ahead into the 2018 season

As usual, the Black Forest Team Hahn Racing with its pilot, four-time European Truck Racing Champion Jochen Hahn, started the preparations for the upcoming season right after the final of the last season. The building phase of the new Iveco race truck is almost completed. Soon, it will be painted and by Easter, it will be all set.

The first test rides scheduled for early April will take place on the oval track of Iveco-Magirus AG in Ulm (Germany). Under almost real racing conditions, three days of actual racing cases will be practiced on the Czech Autodrom in Most at the third week in April.

At the last weekend in May, the season opening will take place on Misano World Circuit located close to the Italian Adriatic coast. And already by end of June and beginning of July, the home race on Nürburgring will mark the first highlight of the season for Team Hahn Racing. Once again, the season final will take place in early October on Circuito del Jarama at the gates of the Spanish capital Madrid.

Jochen Hahn and his team are looking forward to some exciting racing action. With regards to his wishes and objectives, however, last year’s vice champion seems pretty modest – at least at first glance:

“If I manage to rank up just one position, I’ll be more than happy.”

Driver Jochen Hahn is the most successful German driver and was the overall winner in 2016. Since the 2017 season, the team is backing LIQUI MOLY products, meaning our logo will be there for everyone to see on the back of the racing trucks. 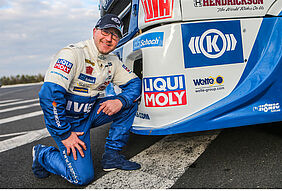