Service to LIQUI MOLY at the MercedesCup

Tennis royalty at the ATP tournament in Stuttgart

Tommy Haas, Philipp Kohlschreiber and Roger Federer: no later than with that last name do tennis fans know what's up. Time for top tennis. After the incredible start to the season with triumphs at the Australian Open in Melbourne as well as the Masters 1000 tournament in Indian Wells and Miami, Roger Federer is also the declared favorite at the MercedesCup in Stuttgart, held from June 10 to 18 and endowed with 701,975 euros.

Roger Federer: "The MercedesCup is a beautiful tournament in a great club atmosphere. Unlike last year, this time I am fitter and in better form, that's why my expectations are also higher. I have never been able to win in Stuttgart, therefore the goal must be to go for the title."

LIQUI MOLY on the hoardings

Five German tennis aces, among them Philipp Kohlschreiber and the experienced Tommy Haas, will also give their best to stand up to "the best Federer of all time", according to experts. Rising star Alexander Zverev also has a wildcard up his sleeve. The spectators can look forward to a great tournament.

It won't just be exciting tennis matches that will live long in the memory, but also Germany's most popular lubricant brand: At this top-level sporting event our logo will be clearly visible on the hoardings, right next to the logo of premium brand Mercedes-Benz - two premium brands, like peas in a pod. This effect is beamed far beyond Germany, thanks to the international TV presence.

To an exciting MercedesCup 2017 with LIQUI MOLY. 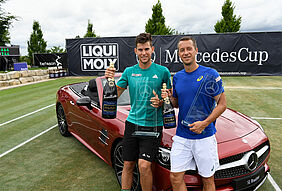