Second win of the season and championship lead for Kallio Racing

Kallio Racing’s Sandro Cortese took the second win of his FIM Supersport World Championship career today in round six at Donington Park, Great Britain. The German who started from the third place of the grid made immediately his way to second and took the lead when one third of the race had passed. Cortese defended this position until the finish line leaving Jules Cluzel and Raffaele De Rosa behind him. The German is now also leading the championship. The weekend in Donington Park was also good for the Finnish team’s young Belgian rider Loris Cresson who started from the 14th place of the grid and greeted the chequered flag on 12th position.

It was a perfect weekend. From the beginning we had a good pace. We struggled a bit in the qualifying but we made some big changes from yesterday in order to make the bike ready to fight for the victory. This morning was good and also in the race I felt that I was quite strong and I attacked after few laps. I had really good rhythm and I really enjoyed racing today in Donington. Big thanks to my team who made a perfect job. Now I am looking forward to Brno.

The weekend was really positive. We made a big step on Friday compared to the other races. I’m happy that we were 11th on the free practice on Friday. On Saturday we found a good setup for the bike. I was confident for the super pole and all the sessions were good but I just missed the SP2 for 0,1 second. On Sunday for the warm up we tried different setting but it wasn’t what I needed so we came back to the other setting for the race. I had a normal start and made my way to 11th position. The rhythm was good and I had a great battle with Anthony West. Unfortunately, five laps before the end the feeling with the bike and the tire became really hard to handle and I started to loose rhythm but I’m happy to finish 12th scoring again four points in the championship. Kiitos (thank you in Finnish) Kallio Racing!

Sandro and the whole team did a really amazing job during the whole weekend. We knew that we can be faster than others if only we manage to make the crucial moves during the race. Today Sandro made an incredible start and made his way to the lead before the race was half way. After this he controlled the race flawlessly. Today everything worked perfectly and this was something we have aimed for. Thanks to my dad (Hannu Kallio) who has worked a lot with the engines. We have worked so hard and have had sleepless nights so in that sense as well this feels just incredible. I am also happy that our junior (Loris Cresson) managed to battle around top 10 together with Anthony West and Sheridan Morais. All in all, a perfect weekend especially when we are now leading the team championship. 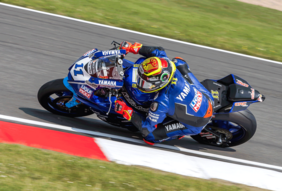