It complies with the Ford standard Ford WSS-M2C 950-A and was developed specially for TDCi diesel vehicles from model year 2014. With a low temperature viscosity of 0W it is a fairly thin oil, and this reduces fuel consumption. But it also offers a high degree of wear-and-tear protection, also for cars with automatic start/stop system.The LIQUI MOLY Special Tec series consists of engine oils that are only suitable for use in very specific models. The “F” in the name indicates that this is an oil for Ford models. In addition to the new Ford oil, a second Ford oil is already available for older models – Special Tec F 5W-30.

About LIQUI MOLYWith around 4,000 items, LIQUI MOLY offers a global, uniquely broad range of automotive chemicals: Motor oils and additives, greases and pastes, sprays and car care, glues and sealants. Founded in 1957, LIQUI MOLY develops and produces exclusively in Germany. There it is the undisputed market leader for additives and is repeatedly voted the best oil brand. The company led by Ernst Prost sells its products in more than 120 countries and generated 441m euros in sales in 2015. 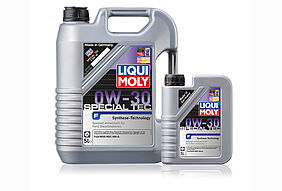