March 2018 – ITALIKA, one of the biggest producers of motorcycles in America and in all the world, has chosen LIQUI MOLY to be their official partner for the ITALIKA Racing Series, the most important motorcycle racing series in Mexico, and the most promising one in all America. It is an honour for LIQUI MOLY to be a partner of a company that has revolutionized the motorcycle market in Mexico, and that will certainly do the same in many other countries in America.

They have chosen LIQUI MOLY because of its high quality and excellent performance, not only in the raceways but in regular operation with ITALIKA Bikes. More than a sponsorship, this is an agreement and a partnership, where two great brands come together to have an impact on the motorbike sport, as well as in the motorbike market.

ITALIKA produces more than 600,000 motorbikes every year, having more than 75% of the Mexican market, and presence in more countries throughout Central and South America.

ITALIKA Racing Series is endorsed by Dorna, reason why we can say that the series is a road to MotoGP. It will be the only motorbike series in the world which will be operating without the need of investment from all the competitors, making it possible for young talents to fulfil the dream of being a motorbike pilot. ITALIKAS high quality and reliability will now be promoted in the race tracks better than ever.

At the official launching ceremony, being the International Women’s Day, ITALIKA confirmed that the Series will include the Women’s Motorbike World Cup, which will be raced by women from all around the world! This will definitely be unique, and there is no other series in the world that can truly offer the same conditions for the pilots, which are now able to reach higher competitions and recognition with ITALIKAS support.

As a first step, LIQUI MOLY oils will be used in all the motorbikes that will compete in the series. But also in the short term, the end consumers will be able to find LIQUI MOLY oil which has been developed specially for the VORT X ITALIKA Bikes, as well as other oil and treatment options for the rest of the ITALIKA models, which range from fleet bikes, vintage bikes, scooters, double purpose and many more.

So, in a few words, LIQUI MOLY is now the official partner with the biggest motorcycle brand in Mexico, which represents a bigger yearly market than the United States Market put together. 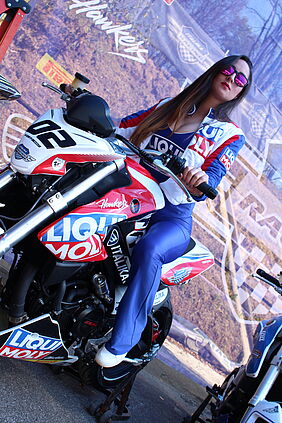