Vierge secures 5th place after battling in the leading group, Schrötter follows in 7th in Brno

Both Dynavolt Intact GP riders started the second half of the season with a solid top ten result. Xavi Vierge led a strong battle in the leading group in the Czech Grand Prix, finishing in fifth position, while Marcel Schrötter followed shortly behind in seventh place.

In Warm-Up on Sunday morning, Xavi Vierge was able to make the final positive set-up changes with his team for the upcoming 19-lap race. The 21-year-old had a rocket start and arrived in the first corner as third. From that moment on the Spaniard fought in the top group. Only when he could no longer intervene in the battle for the podium with a decreasing front tyre, he tried to keep his fifth place and finally crossed the finish line only three seconds behind the final winner and new championship leader, Miguel Oliveira.

Xavi defended his seventh place in the World Championship and after 10 out of 19 races and 90 championship points, he is now only 23 points away from the overall top-3.

Marcel Schrötter followed only 0.3 seconds behind his Intact GP teammate in seventh position after giving everything in the chasing group throughout the race to make up for the five places lost at the start. The 25-year-old, fastest on Friday, finishing Saturday in the top five, finishing second in the warm-up and probably having the best pace of all others, could not hide his disappointment after the race. He truly expected much more.

Nonetheless, with a further nine championship points collected in Brno, the focus is now directly towards the Austrian Grand Prix, which will take place next weekend at the Red Bull Ring from 10th to 12th of August. There, both Kalex riders will try to catch up on the small gap that's still missing for the crucial step to the top. Powered by LIQUI MOLY, hopefully the season's strong performance will be rewarded with a podium place. 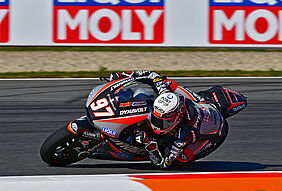