It was a near perfect weekend for Liqui Moly Team Engstler when both Luca Engstler and Mitchell Cheah claimed one win each at Rounds 1 and 2 of TCR Asia Series 2018 at Sepang International Circuit, today (Sunday, 1st April).

Engstler and Cheah started race 1 from the front row while teammate Diego Moran started right behind them in third. The trio set the pace at the start of the race and it looked like it would have been a 1-2-3 for the team when Moran was penalised for a start infringement. Moran had to serve a drive through penalty that pushed him down the grid, eventually finishing the race in ninth.

The two young drivers continued with the race unchallenged claiming two podiums for the team. It was moving experience for Engstler as he remembers following his father Franz up on the podium ten years ago at Sepang. “It was very emotional being here with my dad again, now me as a driver not him. We swapped positions and I am happy. “I have to say thank you to the team. The car felt just perfect. The race wasn’t as easy as it looked, at the start I had a bit of a problem with oversteering and in this temperature, you know I’m from Germany, it was quite tough going 11 laps, but in the end it was perfect”.

Kurt Treml, Sports & Marketing Director for Engstler Motorsport was full of praises after race 1 for his three drivers. “For the team, the results was perfect. It was good but could be better. We had a problem at the start with Diego, he was not in the box and so the stewards decided to give him a drive through, otherwise we would have gotten a 1,2,3 which was our goal. But we are happy with the first two on the podium and especially with the young guys. Diego clocked the fastest time and I think he can be happy with his performance”.

In race 2, the reverse grid order meant that Moran started the race in 8th, Cheah in 9th and Engstler in 10th. The start of the race was as expected, a mad rush to the head of the pack. Cheah was the luckiest of the three when he managed to steer clear of the ensuing melee climbing up to second just a few turns after the start. Both Engstler and Moran were caught in the drama. Engstler was bumped into twice, leaving him to contend with a bent wheel throughout the race but Moran was the unluckiest when he was hit on the side as he was passing a car that spun. After the Safety Car session to clear Moran’s car, Cheah immediately sprung to action, overtaking the leading Thai driver for the race lead and the win. Cheah, who was also crowned the Southeast Asia Cup winner for both rounds, was grateful for the outcome of the weekend. “First of all, I have to thank Sepang Circuit for the maximum support and to Alex for guiding me throughout this year. It was a perfect start to the year. Lastly, I want to thank Liqui Moly Team Engstler, they’ve done a very good job giving me a very good car, it was a perfect start for the team.

Treml summed up the weekend for the team saying “It was a great weekend and we are very happy, proud and satisfied with the results of this weekend. We are looking forward to Buriram, we have been there many times before so we know the circuit and we know the setup that we need to do. The two young drivers will need some testing before for track knowledge but for sure we will do our best”. 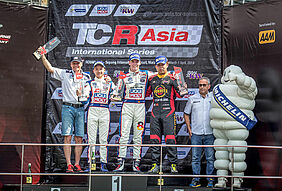