Enhanced protection for the engine

January 2017 – There's always room for improvement, however good a product is. This was what LIQUI MOLY researchers had in mind when they set about giving Marine Diesel Protect an additional function. The additive now not only combats bacteria, cleans the fuel system, provides anti-corrosion protection and increases the cetane number: it also protects the fuel much more effectively from oxidation and ageing so as to avoid the kind of problems that occur after long periods of disuse. The new formula is due to be presented for the first time at the trade fair “Boot” in Düsseldorf.

“Marine Diesel Protect is a versatile all-purpose solution that can be used preventively or to tackle an existing problem,” says Jan Volk, who is in charge of the marine trade at LIQUI MOLY. “If you have the additive on board, you’re well equipped to deal with all the typical diesel problems.”

One of these is the ageing of diesel fuel. This tends to occur in boats that are out of service for lengthier periods or are not moved very much. The chemical composition of the diesel fuel changes over time. Resin-like residues can form which block the nozzles and filters. The new Marine Diesel Protect formula slows down the ageing process of diesel fuel and protects it from harmful oxidation.

LIQUI MOLY Marine Diesel Protect also provides protection from microbial contamination. Bacteria, yeasts and moulds spread during periods of disuse, forming a tough slime that blocks the fuel filter, forcing the engine to stall. Marine Diesel Protect combats these microorganisms. The additive also removes deposits from the entire fuel system and ensures effective protection from corrosion. Finally, it contains a cetane number improver that makes the fuel more combustible. So even after lengthy periods of disuse the engine starts without a problem.

“Our Marine Diesel Protect is the chemical Swiss army knife for all those who own a boat with a diesel engine”, says Jan Volk. “Instead of using lots of different additives, you can use one to cover a whole range of applications.”

The improved Marine Diesel Protect will be presented for the first time at the trade fair “Boot” from 21 to 29 January in Düsseldorf. LIQUI MOLY can be found in Hall 10 at Stand F18. 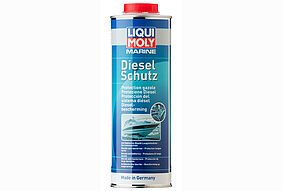