In his first race in the Supersport World Championship, Sandro Cortese, supported by LIQUI MOLY, showed a strong performance, taking third place on the Philip Island track in Australia.

The 28-year-old German has been racing for the Finnish racing team since this season and can look back on a long collaboration with Germany's most popular lubricant brand. Cortese became 2012 World Champion in the Moto3 class. He then drove for five years in Moto2 with the support of LIQUI MOLY and captured some podiums. In winter he left the Moto2 and moved to Kallio-Racing in the Superbike series, where he now competes in the Supersport class. The second driver at Kallio-Racing is the Belgian Loris Cresson (19).

"This is a good combination of a young talent and an experienced veteran," says Peter Baumann, marketing director at LIQUI MOLY. "Maybe Supersport, in addition to our involvement in MotoGP, will become a second pillar of our international motorcycle communications." So the first race was very promising in this respect.

In MotoGP, LIQUI MOLY advertises on the racetrack and is also the official lubricant supplier for all teams in Moto2 and Moto3. In addition, the company supports the Intact GP team in Moto2. LIQUI MOLY is not only offering motor oils and additives for motorcycles, but a complete range of chemicals with chain spray, polish, helmet cleaner, fork oils and much more. "Such a comprehensive product line specially developed for motorcycles is an exception in our industry," says Peter Baumann.

To the bike range 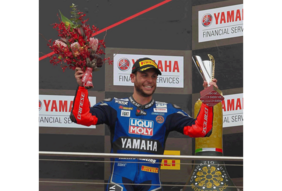