Eberhard Stilz, president of the constitutional tribunal for the state of Baden-Württemberg and president of the Weltethos foundation, is filled with joy by the support: "Our work is more in demand than ever, particularly in times of global insecurity and migration. The generous contribution gives us enormous help in being able to approach our task even more efficiently." Beginning with this year, the Ernst Prost Foundation and LIQUI MOLY will each support the work of the Weltethos foundation with 50,000 euros for an initial period of three years. Furthermore, Ernst Prost was appointed a member of the board of trustees.

Seven years ago, Ernst Prost, CEO of lubricant specialist LIQUI MOLY, established the Ernst Prost Foundation, in order to help people in need by no fault of their own. After dramatic experiences in South Africa in 2015, the Ernst Prost Foundation for Africa was established in the same year. The support of the Weltehtos foundation is a further important step for him when it comes to making the world a better place. Ernst Prost: "President Eberhard Stilz and his team do a good job in this crazy world. Some of the pain that we suffer as people is probably "due to" our fate. For example, diseases, disability, hardship and death... With the Ernst Prost Foundation we are working to alleviate this pain that people suffer. But there is also human-made suffering: wars, displacement, racism, hate and a lack of charity. This is where the Weltethos foundation forms its attack. Yes, a lot of pain in this world would not even exist, for people and animals alike, if all people would actually act like people: peace, respect, charity, tolerance and helpfulness."

The founder of the Weltehtos idea and the foundation with the same name is the theologist Hans Küng, born in the Swiss canton of Luzern in 1928. In 1993, the Parliament of the World's Religions made a "declaration toward a global ethic", or Weltethos in German. "A global era, which is shaped differently to any before it by global politics, global technology, global economy and global civilisation requires a global ethic," Hans Küng said in the same year. The Weltethos project tries to outline the things the world's religions have in common and to create a brief set of rules of the basic demands that can be accepted by us all – a mutual ethic. Hans Küng: "This world needs an ethic; this global society does not need a single religion and single ideology, but instead needs several uniting and binding standards, values, ideals and goals."

It is these shared and uniting values that are important to Ernst Prost in his daily life, but privately and professionally: "Honesty, reliability, kindness, thankfulness, diligence, decency, respect and tolerance are just a few of our values at LIQUI MOLY, which accompany us in our daily work like guard rails, internally as well as externally towards customers and suppliers. It is not unusual for us to cause great surprise with these 'old-fashioned practices', yet we see them as a matter of course," says Ernst Prost.

With his two foundations, Ernst Prost provides real help in Germany, now even globally and especially on the continent of Africa. The work of the Weltethos foundation has a global, higher approach: it assumes that a peaceful togetherness of people and nations is only possible if the world's religions are ready for a dialogue and peace. A global ethic is only possible with a change in awareness of all people. "This is a major goal that it is worth working towards and fighting for. That's why the Ernst Prost Foundation and LIQUI MOLY support the Weltethos foundation," explains Ernst Prost. 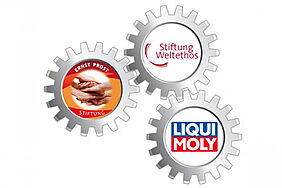