March 2016 – The German motor oil and additive specialist LIQUI MOLY has increased its turnover during the past year to a new record high. 441 million euros, an increase of 20 million euros over the figures for the previous year. This growth was achieved in spite of problematic basic conditions on the key markets. "For me the number of new jobs is even more important than the increase in turnover", stated Ernst Prost, Managing Partner at LIQUI MOLY.

The number of employees increased during the previous year by 35 for a total of 731. And 16 more employees have already been hired during the first two months of this year.

There are two reasons for the fact that our turnover increased "only" by five percent. On the one hand the company focuses primarily on high quality growth. "Turnover without profit is not good turnover“, said Ernst Prost. And on the other hand the situation in Russia, one of LIQUI MOLY's most important foreign markets, has dwindled significantly. The weak Russian ruble has increased the price for products from the European area by more than 50 percent. And the economic crisis in Russia has also decreased demand significantly. Then we also have the continuing turbulence in once strong turnover markets such as Ukraine. However this decrease was compensated by other countries.

Business in Germany and Austria developed surprisingly well. In spite of the strong position already obtained on the market, turnover increased there by seven percent.

This means LIQUI MOLY has nearly doubled its total turnover since 2009. "These are growth figures usually experienced during start-up", said Ernst Prost. "And to a certain extent we are a start-up in our branch, because we are faster, more flexible and closer to customers than our major competitors". A part of this success is the fact that we produce exclusively in Germany. But growth is not an end in itself. Ernst Prost continued: "This isn't a matter of figures. Much more important is the fact that the company grows healthily and can provide more jobs for more people."

One expression of the financial health of LIQUI MOLY is its equity ratio of over 70 percent. This makes the company independent of banks and allows high investments. For example the program of modernization and expansion for the oil factory in Saarlouis will be concluded this year. An investment volume of 13 million euros will provide additional storage tanks, new laboratory facilities and state-of-the-art production lines. In 2017 this will be followed by conversion of additional tank storage facilities as well as investments in energy supply amounting to over five million euros. "This will put us in a good position to continue on our course to becoming a global brand", said Ernst Prost.

The fact that crude oil prices are at a record low, has hardly any effect on the final price of motor oil. LIQUI MOLY does not process any crude oil directly from wells; it uses the next step in production: so-called basic oils from refineries. The price for these depends highly on refinery capacities and demand. The price for fully synthetic basic oils has not decreased; it has experienced an increase in the two-digit range. Moreover state-of-the-art motor oil consists to one third of additive packages and the cost for these is increasing continuously - regardless of the oil price. Finally the strong dollar has also increased the purchase price for raw materials. All totaled this has led to the price for motor oil remaining stable instead of falling. 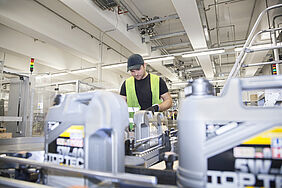