State-of-the-art motor oils are produced with very limited tolerances. On the one hand, this makes them very efficient, however, on the other, they are very sensitive to contamination. And contamination is bound to occur sooner or later, depending on the fuel quality, driving style, oil quality and engine technology.

As in the case of an Audi owner. His Audi A5 2.0 TFSI model year 2011 had mileage of 81,435 kilometers. The owner complained of the continuously increasing oil consumption, which had reached 1.5 liters/1000 kilometers. An Audi workshop wanted 4700 euros for the repair work. Then the owner contacted us.

“Considering the mileage, it was suspected, that dirt in the engine contributed to the high oil consumption”, explained Dietmar Schmid, Applications Engineer at LIQUI MOLY. For this reason we reached into our toolbox and pulled out a pair of chemical brushes.

The Pro-Line Fuel System Cleaner was used to remove contamination from the fuel and injection system. Simply pour this additive into the fuel tank. Each time the engine runs, the effective ingredients dissolve deposits on the injection nozzles. This ensures that the fuel is again atomized finely allowing it to burn cleaner and produce fewer residues. The oil circuit was purged with Pro-Line Engine Flush. This product is added to the old oil just before it is changed. It dissolves sludge and deposits which are then drained together with the old oil. Finally the contamination in the intake system was removed with Pro-Line Throttle Valve Cleaner, allowing the engine to breath freely again.

After a short test drive, the compression was measured again. The value had improved between 0.5 and 1.5 bars on all four cylinders. Inspection with an endoscope showed that the combustion chambers were now significantly cleaner and wet spots were no longer visible on the piston crowns.

Since that time the car owner has driven 600 kilometers. Before it would have been necessary to add oil some time ago, but now the oil consumption is nearly zero. And this success cost less than five percent of the initially estimated repair costs. “This is an excellent way for workshops to secure customer loyalty”, confirmed Dietmar Schmid. “Not only does it solve the problem, it does it for a fraction of the cost quoted by the competition. This spreads quickly by word of mouth.”

The advantages of additives are that, in addition to their effectiveness, they cost less and are easy to use. “Additives are not a panacea for revitalizing defective engines”, continued Dietmar Schmid, “but they are useful chemical tools, every good workshop should keep in their toolbox.“ 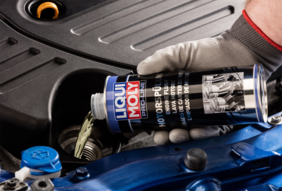