May 2018 – To ensure powerful workhorses remain powerful, the German motor oil and additive specialist LIQUI MOLY has developed its own additive line especially for pick-up trucks. With it the engine remains powerful and a creeping loss of performance is avoided. "This helps in everyday life and in situations where it's important that the pick-up can deliver its full performance," says David Kaiser, Research and Development Director at LIQUI MOLY.

The Truck Series starts with a widespread problem: The creeping loss of performance. Due to deposits on the inside of the engine, the combustion worsens because the fuel is no longer being so finely atomized. The result: Less performance, higher fuel consumption and even more deposits. A vicious cycle. Because this is a creeping process, the driver often doesn't even notice it.

The Truck Series by LIQUI MOLY gets to the core of the problem. The five gasoline, diesel and oil additives ensure that strong engines remain strong. One of the first people to be able to try out the new additives was Baja racing driver Armin Schwarz: "I use all five additives both in my private diesel pick-up and in my gasoline pick-up for races. The latter is a Ford Raptor Racing Trophy Truck with 960 hp, which really gets through any terrain. These additives are unbeatable when it comes to keeping the performance of my trucks right at the top and protecting them against all hindrances."

The Truck Series Complete Diesel System Cleaner an effective cleaning additive, which frees the fuel system and the combustion chambers from deposits. It is ideally implemented from time to time, for example, as part of the oil change. Or if problems occur due to deposits, i.e. the engine runs unsteadily when idling, no longer exerts its full performance or expels smoke clouds. Simply pour the Truck Series Complete Diesel System Cleaner into the tank.

The Truck Series Diesel Performance and Protectant is designed for permanent use. It is multi-talented, not only removing deposits, but also preventing the creation of new deposits and increasing the cetane number. The counterpart for gasoline engines is the Truck Series Complete Fuel Cleaner. With it the engine runs more quietly and consumption is reduced. The older the truck and the higher the mileage, the greater the effect of the additives. The large 500 ml cans are designed for the tank capacity of pick-up trucks. Simply add a can to the tank every 2,000 kilometers.

The fourth additive of the new Truck series is the DPF Protector. If the truck is mostly used for short journeys and in urban traffic, the diesel particulate filter does not reach the necessary temperature in order to begin automatic regeneration. The result: The filter is prematurely blocked. The DPF Protector reduces the temperature required for automatic regeneration, so that the filter remains unblocked.

The fifth additive of the new Truck series is the Oil Treatment. It contains MoS2 particles as a lubricant, which reliably protect the engine against wear. This is not only important when starting the engine, when the oil has not yet reached every part of the engine and metal grates against metal. Even when the engine is under extreme stress, it ensures that the engine is not damaged. And it even protects the engine should the lubricating film ever tear off.

"The additives of our Truck series are power packs for power packs," says David Kaiser. "They help reliably complete even the toughest of jobs." 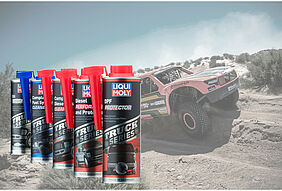