One record after another for LIQUI MOLY

•Double strike: March was followed quickly by April as the strongest month for turnover in company history

Ulm, May 2016 - Top athletes such as Usain Bolt or Michael Phelps are in the habit of breaking records. The Jamaican runner and the US swimmer collect titles and regularly beat their own personal bests. With their April turnover, LIQUI MOLY, the German engine oil and additive specialist, outperformed the record they had only just set in March. €45.1 million is the lubricant company's best result since the company was founded almost 60 years ago.

Record turnover in both March and April was a double strike for the company. In March LIQUI MOLY recorded a turnover of €42.4 million, 14 percent more than March of the previous year and an all-time record - until the end of April. The second quarter started in the same way the first had ended - with record turnover. The accounts show a turnover of €45.1 million for April. This is 15 percent more than in April 2015. "We are not leaving everything to the final sprint. Since January we have really stepped on the gas," commented LIQUI MOLY CEO Ernst Prost, about the consecutive company bests.

Just how much the company has been stepping on the gas can be seen from the outstanding results from the previous few months: before the current top turnovers, the company had beaten their previous year figures in September and July. In March and April the increases amounted to €5.2 million and €5.9 million respectively compared to the same period in 2015. If we take a look at the market conditions these figures become even more significant. "Globally there has been enormous upheaval due to armed conflicts. There have also been some extreme difficulties within the sector." The price war between oil producing countries has also been playing out on other levels. Some oil and lubricant manufacturers themselves have contributed to the spiraling price increases. "This makes the market even more difficult for made-in-Germany," say the LIQUI MOLY boss, "but we have defied the price war, so far, with high-quality products, service, technical problem solving and individual customer support."

Seasonal business has also helped the company to do well following this path. Spring is traditionally the time when motor cycles, classic cars and vintage cars are brought out of hibernation and everyday cars are revamped. For dealers and garages this means boom time. "This has boosted our turnover magnificently," says the CEO. The recent record months have made Ernst Prost confident that more strong months are possible. Lots of drivers and motorcyclists schedule in pre-holiday checks during the summer. LIQUI MOLY supplies garages with numerous products for this work, ranging from service sprays through to air conditioning and motor cleaning systems and, of course, engine oil. "New services such as the geartronic concept of fully automatic transmission oil changes expands this range and increases the turnover opportunities for dealers, garages and LIQUI MOLY," explains Ernst Prost.

If everything goes well, the second quarter will eclipse the first, just like April's turnover did March's. In the first three months of the financial year LIQUI MOLY recorded a turnover of €113 million; ten percent more than in the same period the previous year. The first third of the year also produced some outstanding figures: turnover of €158 million and an increase of eleven percent from the same period last year. "We have set the bar really high for ourselves. But with diligent training and good discipline it will be possible for us to beat our monthly record once again. At the very least we want to be celebrating a personal best at the end of the year. We've got the magic half a billion euro turnover in our sights," says the CEO, looking ahead. "And we want to establish ourselves as a global brand, just like Usain Bolt and Michael Phelps." 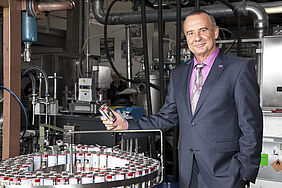