LIQUI MOLY has been working together with Beta in Italy for three years. There, too, all the bikes roll off the production line with LIQUI MOLY oil. The decision by Rieju for LIQUI MOLY is the next step in the OEM business.

"With its involvement in MotoGp, LIQUI MOLY has made a name for itself in the world of motorbikes," says Jordi Riera, CEO of Rieju. Every team in Moto2 and Moto3 ride with oil by LIQUI MOLY. "We are happy to have found a partner that backs quality just as uncompromisingly as we do."

That's why the cooperation is not limited just to products for the new bikes. Both companies are planning mutual exhibition appearances, advertising measures and sales activities. There is along-term strategy behind this, in order to use synergies and increase the mutual benefit.

As with its core business of automotive, LIQUI MOLY is also following the philosophy of offering a very broad range of chemical products in the motorbike sector. That's why there are not only motor oils and additives, but also fork oils, gearbox oils, chain sprays, leather balm and much more. All from one source, aligned to one another and tailored to use in motorbikes.

About RIEJU
Founded in 1942, RIEJU offers a comprehensive range of motorbikes: Off-road and Supermoto (MRT, MARATHON, Tango) as well as state-of-the-art developments in the 50 cc class (two-stroke) and in the 125 cc class (four-stroke). Add to this sport bikes such as the RS3 family and the RS and BLAST scooters. E-bikes have been added as a new product line. All of these two-wheelers have a large following in Germany, Spain and France. They are exclusively manufactured in Spain by a strong and environmentally friendly company. More than 10,000 vehicles are produced every year. 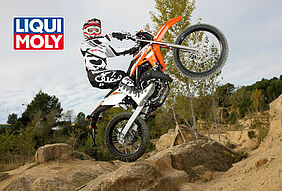