Crowning glory of the TCR Middle East Series in Bahrain

Luca Engstler (17) went to the final in Bahrain with a 14-point lead and was able to use his advantage to his benefit right from the start. Engstler was only able to drive half of the free training for technical reasons, however, this had no influence on his performance in qualifying. He put up the best time in his VW Golf GTI TCR and thereby secured pole position for the first race. His team colleague Florian Thoma drove the third-best time and therefore started in the second row.

"I had the championship title fully in my sights and am proud that I can say thank you to the entire team for their support with my success. My VW Golf GTI TCR was always ideally prepared and this allowed me to call up my performance to the point."

This was also the case in the final run in Bahrain, even though the weather made conditions much tougher with heavy rain. Very unusual for Bahrain. However, Luca Engstler was still able to make perfect use of his pole position at the start and safely drive to victory. It was the first race in the rain for team colleague Thoma. He, too, mastered the task with distinction and came second in a turbulent race. With his second place in Bahrain he also secured third place in the championship. Thoma and Engstler gathered valuable points for the team ranking with their podium finishes.

"Both drivers showed a great performance, even though the racing conditions were really very tough. They mastered the challenge very well and deservedly stood on the podium. Lucas' championship title is the crowning glory for great races in the TCR Middle East Series, as is third place for Florian in the championship. The continuous performance of both drivers also secured the title in the team ranking for us, which, of course, makes us very proud."

The second race had to be unceremoniously cancelled, as the ever-heavier rain caused unacceptable conditions on the Bahrain race track. This meant the championship was decided after the first race for Luca Engstler, Florian Thoma snd the LIQUI MOLY Team Engstler.

Now both have their sights set forward, with their focus now on the ADAC TCR Germany, which takes place in April in Oschersleben. 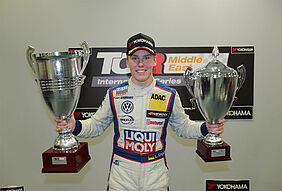