All four races in the 2018 season have been won by a Liqui Moly Team Engstler driver with a double podium finish at every race outing.

“It’s been an outstanding start to the season for us but it was not all smooth. We are still waiting for that first clean sweep for this season as we know we have the cars and the best drivers to do this” said Kurt Treml, Sports & Marketing Director.

Up ahead, Moran clearly made the team’s effort in fixing his car after the crash in Sepang, worthwhile. “I’m very happy of course - first place. Yesterday I almost got the first place and today I was determined to push and try my best to get first place”. The reverse-grid order meant that the Ecuadorian had to start the race in 9th, “luckily for me I had a good start. I recovered a couple of positions at the start then immediately fought with a couple of guys, then I managed to find a window and risked it a bit in the first lap”. The risk paid off and Moran was up to second by lap 2, “then I caught up to first and I think he opened the door for me and I passed without too much problems”.

Behind him, Engstler was also picking his way through the grid but taking his time and enjoying the sunny weather. By lap 5, Engstler was right up behind Moran and was pressuring him. “Then I was pushing to try to escape from Luca, he was very fast. When he was finally close to me to start attacking, I drove well and did not make too many mistakes so I managed to maintain my position, but right to the last lap I was just trying to defend from him. It was good and I am happy because Luca is very young but he is a very experienced driver who is very good and I am happy I managed to beat him this time”.

There will be another short break in between races before the team returns to Thailand mid July, a good time to recoup from a mixed weekend for Treml.

“It was indeed a good but frustrating weekend. We were close to a top three finish for both races before we had punctures, it was just unbelievable. This weekend I am especially proud of the crew, it has been really hot here in Thailand but they have managed all three Volkswagen Golf GTi’s perfectly.We saw the speed and the driver’s ability, it was perfection. Next race is Bangsaen and for sure it will be a challenge for our young drivers. Bangsaen is very narrow and a special street circuit with an advantage for the Thai drivers but we will be well prepared”.

Liqui Moly Team Engstler will return to Thailand to the Bangsaen Circuit for Rounds 5 & 6 of the TCR Series Asia this 13th-15th July 2018. 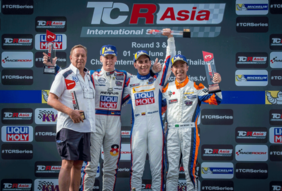