With a total of 42,000 spectators on site, brilliant summer weather and track temperatures above 50°C, the 2018 season of the FIA European Truck Racing Championship (short: ETRC) started off on Misano World Circuit close to the Italian Adriatic coast – an extremely successful race weekend for Jochen Hahn and his team.

On both days, the Iveco pilot won the first races – i.e. those ones with doubled score for the winners. But “Die Bullen von Iveco Magirus” (English: “the bulls on Iveco Magirus”), the team consisting of Jochen Hahn and his brand Iveco colleague Steffi Halm, also reached the podium a total of three times – twice even ranking first.

At the top-ten Super Pole on Saturday morning, Jochen clearly achieved the fastest lap time thus getting hold of the pole position of the first race of the season. At the beginning of the race, his Iveco shared the first row on the grid with Antonio Albacete’s MAN – that’s a total of seven championship titles in one row. Jochen clearly won the duel at the start and managed to increase the gap towards his chasers.

Jochen’s teammate Steffi Halm didn’t get to participate at the Super Pole as a stone hit her windshield. And when the race was restarted, she started from the pit lane after changing a tire during the interruption. Throughout the race, however, she managed to rank up to fourth position thus bringing the team the first rank on the FIA team podium.

Sunday once again started off pretty promising. With an outstanding advantage over Kiss and Steffi Halm, Jochen once again won the Super Pole. And even at the subsequent race, the pilot from Altensteig seemed equally predominant and achieved another perfect start-to-finish victory. Right at the start, his teammate got hold of the second rank as she prevailed over the Hungarian double champion. The bulls on Iveco Magirus thus achieved the highest possible score at the team standings.

With a total of 88 points gained, the bulls on Iveco Magirus also clearly lead the team standings. “I am more than happy,” Jochen said on Sunday evening. “We didn’t really know, where we stand. Accordingly, we were all a little nervous. Being that good made us pretty happy, but we must not forget, it was the great dedication of my team and of our sponsor making it possible in first place. Thank you all by heart!”

The second round of the FIA ETRC will take place from July 15 to 17 on Hungaroring close to Budapest. 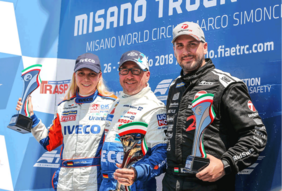