It was a sensational triumph, a fantastic start to the LIQUI MOLY motor racing season and evidence of truly first-class quality: in the 24-hour race at Dubai Autodrome, LIQUI MOLY Team Engstler claimed first place in the TCR and even outright victory in the TCE category, i.e. including all touring cars. Key factors: A tour-de-force on the part of the drivers and the outstanding quality of LIQUI MOLY transmission oil.

LIQUI MOLY Team Engstler went out to Dubai for the 24-hour race boasting an excellent line-up with Jean-Karl Vernay, Benjamin Leuchter, Luca Engstler and Florian Thoma. The four drivers of the Engstler VW Golf GTI TCR put in a great performance right from the word go.

This was the first 24-hour race for Engstler and Thoma, the two regular members of LIQUI MOLY Team Engstler. Together with Vernay (TCR international championship winner) and Leuchter (winner of the VLN Championship / Nürburgring), they made a perfect team, finishing third in their qualifying race and seventh in the TCE class. This laid the foundation success.

Then at 2 pm on Friday the start lights turned to green and the race got underway for the almost 100 vehicles. 12 hours later it was clear that the team had chosen the right strategy and everything was going to plan. But during the last eleven hours, the transmission had to make do without fourth gear, with the transmission oil temperature permanently at over 150 degrees. An extreme challenge – but no problem for the LIQUI MOLY 75W-140 transmission oil. This 24-hour race under extreme conditions provided yet further evidence of the truly outstanding quality of LIQUI MOLY lubricants.

Kurt Treml, the team’s sports director: "We’ve shown what’s possible in a VW Golf GTI TCR and we’re grateful to LIQUI MOLY for giving us this opportunity. But most of all I’d like to thank the team as a whole: everyone did an absolutely superb job at the track. This kind of thing is only possible if everyone pulls together and the organization is 100 % perfect – both before and during the race".

The team is by no means intending to rest on its laurels, however. Quite the opposite: they’re already looking ahead to the next challenge – the opening race of the TCR Middle East Series in Abu Dhabi is on the program this weekend. Here Luca Engstler and Florian Thoma will be lining up at the start in an Engstler Golf –

and hopefully, LIQUI MOLY products will once again ensure victory 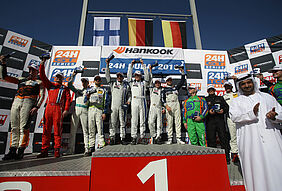