LIQUI MOLY demonstrates how to simplify vehicle and machine maintenance, avoid problems, and extend maintenance intervals at the BAUMA

April 2016 – Minimizing downtime and breakdowns: that's the goal the German motor oil and additive specialist LIQUI MOLY has set for itself. At the BAUMA in Munich, Germany the company shows what can be achieved with simple measures. "Less downtime means more productivity and fewer costs," explains Roland Schmidt, who is in charge of the Construction and Industry division at LIQUI MOLY.

LIQUI MOLY uses six typical problems to demonstrate how easy preventive maintenance can be and how quickly it pays off.

Problem 1: Dust in the motor oil. There’s no way to keep dust from getting into the motor oil when running engines in a dusty environment. This significantly increases wear in the engine. The more dust accumulates in the motor oil over time, the worse the wear becomes. LIQUI MOLY Pro-Line Engine Flush provides relief. The cleaning additive is always added to the engine before an oil change. Its active ingredients dissolve the dust particles and keep them suspended so that they are drained off together with the oil. The fresh oil is filled into a clean engine where its full performance can be achieved.

Problem 3: Acidic water in mines. Standard grease cannot withstand it and is washed out. This escalates wear, particularly at pin joints. The LIQUI MOLY Longtime Grease C2LP provides relief. It is formulated based on calcium soap and has a very high adherence and load bearing capability. The water-repellent effect helps to keep the lubricating film on the surface for a maximum amount of time.

Problem 4: High sulfur diesel fuel. This creates sulfuric acid during the combustion process in the engine. That's why engine oils include additives which neutralize sulfuric acid products, so that they cannot do any harm. But the neutralizing capability is limited. Once the additives are depleted, engine corrosion will occur. Those who want to be on the safe side change the oil at shorter intervals – or use dedicated motor oils by LIQUI MOLY, which offer a higher acid protection and can significantly extend oil change intervals.

Problem 5: Contaminated injectors. Over time, debris form in the drillings of injectors. These prevent the injector from atomizing the diesel fuel into a fine spray. Once the spraying pattern becomes irregular, this has an immediate effect on the engine performance. Power and torque are reduced and fuel consumption increases. Poor diesel fuel quality makes all of this even worse. This vicious cycle can be broken with the LIQUI MOLY Pro-Line Super Diesel Additive K. This concentrated additive is simply added to the vehicle tank or at the filling station. It removes harmful deposits, protects the fuel system from corrosion and increases the life cycle of the injectors. Last but not least the cetane number is increased, leading to a more efficient combustion.

Problem 6: Declining hydraulic oil performance. The additives in a hydraulic oil become used up over time, reducing their performance. The result is stick-slip, increased wear and brittle seals. Instead of exchanging the hydraulic oil, adding LIQUI MOLY Hydraulic System Additive will do the job. It gives the old hydraulic oil a new lease of life, reduces the oil temperature, slows down the aging of the oil and protects against the formation of foam, sludge and corrosion.

LIQUI MOLY has more than 50 years of experience with additives and produces exclusively in Germany.

About LIQUI MOLY
LIQUI MOLY GmbH from Ulm in South Germany offers a wide range of high-quality products such as motor oils, gear oils, hydraulic oils, greases, additives, vehicle care products, and service products.
LIQUI MOLY develops and tests their products in their own laboratories, manufactures exclusively in Germany and markets all of their products themselves. LIQUI MOLY was founded some 50 years ago and is now one of the leading companies in the industry. The products are sold in Germany and in 120 other countries. 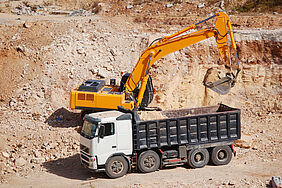