January 2017 – LIQUI MOLY shifts up a gear. The German oil specialist is now expanding its extensive winter sports sponsorship with the addition of two event series: the World Luge Championships in Innsbruck and the Ski Jumping World Cup in Norway. “The feedback on our winter sports sponsorship has been so good, we want make the most of the momentum,” says Peter Baumann, LIQUI MOLY Marketing Director.

The first new contest is the World Luge Championships in Innsbruck at the end of the month. Here LIQUI MOLY will be seen on the athletes’ shirts and along the track. The other source of fresh momentum is the Ski Jumping World Cup in Norway, for which athletes will be competing in Oslo, Lillehammer, Trondheim and Vikersund this March. Here again LIQUI MOLY will be visible on shirts and in the finish area.

The tournaments in Austria and Norway will be added to a LIQUI MOLY winter sports sponsorship package that is worth millions and already includes contests in Europe, North America and Asia. “It introduces millions of spectators to LIQUI MOLY – people we wouldn't otherwise reach with our involvement in motor racing,” says Peter Baumann.


About LIQUI MOLY
With around 4,000 items, LIQUI MOLY offers a global, uniquely broad range of automotive chemicals: Motor oils and additives, greases and pastes, sprays and car care, glues and sealants. Founded in 1957, LIQUI MOLY develops and produces exclusively in Germany. There it is the undisputed market leader for additives and is repeatedly voted the best oil brand. The company led by Ernst Prost sells its products in more than 120 countries and generated 441m euros in sales in 2015. 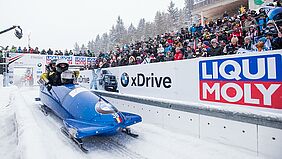