Kallio Racing´s Sandro Cortese took his third superpole of the season yesterday but at today´s race he lost two places in the start. The German soon found his pace and the battle for the lead between him and Jules Cluzel was extremely intense throughout the race. Cortese tried to overtake several times but despite an extremely aggressive fight he had to settle for the second position while Cluzel crossed the finish line first. Raffaele de Rosa ended up third.

Cortese managed to keep his lead in the championship but is now only two points ahead of Cluzel. The Finnish team´s Belgian rider Loris Cresson who started from the 18th place of the grid made a great improvement and took his second top ten finish of the season.

Sandro Cortese: It was a good race today but I am very disappointed as I was much faster than Jules. His engine today was so much better. I just had no chance to overtake him. I probably would have crashed and I couldn´t risk the championship. But we took home 20 points, we did a great job during the whole weekend and we showed that we can win and now we look forward to the next race in Misano.

Loris Cresson: The weekend was good and hard. On Friday we struggled in FP2 to find a good setup but we managed to find an improvement in the end. Saturday morning was good, but for the qualifying we chose the wrong tyre and setting. This morning we found a really good setting for the bike. I was feeling good in the race. I didn’t gamble to choose the hardest tyre so I went with the soft option, unfortunately seven-eight laps before the finish I struggled a lot to find grip at the front but a new top ten finish makes me happy! I am really excited to come back to Misano! Kiitos (Thank you) Kallio Racing Team!

Vesa Kallio: Cluzel was very strong today, especially his bike had a better pace. Sandro really gave everything but we just couldn´t beat Cluzel this time. I believe that if Sandro would have been able to overtake and do his own riding his lap times had been better. But there is no reason for ifs and buts now. We just have to find improvements for the bike so that we can beat Cluzel and other guys in Misano. Loris had a good race fighting for a top ten position with Eemeli Lahti. I think that during the weekend we found together with Loris a way how to work better and get better positions already for Saturday´s qualifying. Thanks to the whole team for the great work!

Round eight of the FIM Supersport World Championship will be held 6-8 of July at the Misano circuit in Italy. 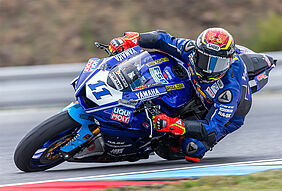