The Late Model V8 Oval Series (LMV8 Oval Series) is a racing class that is based at Raceway Venray in the Netherlands and is held on the half-mile oval there. The drivers race in US stock cars that reach speeds of up to 220 kilometers per hour on the oval. The Bachor Racing Team from Wattenscheid is sponsored by LIQUI MOLY. Philipp Bachor is the driver, his father Uwe Bachor is the team owner and a dedicated fan of LIQUI MOLY.

Tell us a bit about your sport. What makes this racing series so special?

Uwe Bachor: The LMV8 Oval Series has fairly strict regulations. This is why a lot comes down to the skills of the driver and the mechanics who work on the set-up. We like the fact that competition is close and every detail counts. Also, the best drivers start right at the back and have to fight their way through the entire pack. This format promises pure excitement for both drivers and spectators. Admission fees for a day at the races are very inexpensive for visitors, which is why thousands of motor racing enthusiasts always make their way to Raceway Venray in the Netherlands. The registration and start fees that teams have to pay are very affordable, too – lower than at other racetracks.

Which products are your favorites from the full LIQUI MOLY range and why?

Uwe Bachor: It’s virtually impossible to pick a single favorite from such a huge range. As we see it, there aren’t any products that are not good. To keep the car in shape, our team particularly likes to use Synthoil Race Tech GT1 10W-60 , which was developed especially for motor racing. We also really like the Windshield Cleaner Foam, Gloss Spray Wax, Microfiber Cloths and Tar Remover. The Fix-clear Rain Repellent is an enormous help, too – after all, we don’t have any windscreen wipers on our car. We only use LIQUI MOLY products for the LMV8. There were no technical failures at all during the entire season – and as far as we’re concerned LIQUI MOLY’s excellent products are definitely a factor here – all the oils, lubricants and care products are simply superb.

How did you get involved in racing and what is it about the sport that you find so inspiring?

Philipp Bachor: My father has been actively involved in racing since he was 17, and I’ve always been in on the action ever since I was a child – I was 4 when I first drove a go-kart. The first time I entered an actual race was at the age of 8. I switched to automobile racing at the age of 14, when I got into the auto speedway scene at the oval, and then I was 16 when I entered the Chevrolet Cruze Cup on the circuit in Oschersleben. At the same time I took part in the Formula Toyota Championship at the oval.

What was the biggest challenge you faced and what do you believe was your greatest success?

Philipp Bachor: Since we got into the LMV8 Oval Series, the biggest challenge for us has been understanding American stock cars and the big oval at Raceway Venray. Before we first entered a race we had no experience of this racing segment so we didn’t have any data to draw on. And yet we still managed to finish our first training session in first position. In our very first LMV8 championship in 2017 we finished fifth. The greatest success of my career was winning the Chevrolet Cruze Cup.

What properties are particularly important to you in a racing car?

Uwe Bachor: We always take a car to the very limits of the regulations but never beyond – as far as we’re concerned, fair competition is very important.

What advice would you give to anyone looking to pursue a career in motor racing?

Philipp Bachor: I think carefully about where I want to go. We then look at the finances and do everything we can to put our plan into action. Our long-term sponsors are a key factor of course. Without them, none of this would be possible – we’re really glad of their support and we’re extremely grateful. All in all, motor racing is a tough business that requires a lot of discipline, willingness to learn, ambition and physical fitness. 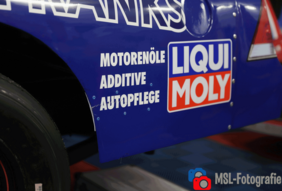