German oil manufacturer will support the competitions in Oberstdorf in January

December 2017 – When the Ski Flying World Championships get under way in mid-January in Oberstdorf, LIQUI MOLY will be involved. The German oil and additive manufacturer supports the competition as part of its multi-million winter sports sponsorship. "Oberstdorf is a home game to us," says Peter Baumann, Marketing Manager at LIQUI MOLY.

The ski arena is less than two hours drive from the LIQUI MOLY headquarters in Ulm. Compared to other events that are also supported, in Canada or South Korea for example, this is just a stone's throw away. LIQUI MOLY is therefore inviting lots of customers to Oberstdorf for the weekend. There they will see the company logo on start numbers and hoardings, on the wall behind the award ceremonies and at the athlete's entrance to the arena.

The Ski Flying World Championships in Oberstdorf is a part of the multi-million winter sports sponsorship by LIQUI MOLY. The oil and additive manufacturer has never invested so much money into winter sports before. "We are not only reaching a broad range here, but can use this to bridge the period in which many of our involvements in motorsports are off-season," says Peter Baumann. "And with winter sports we reach people that we would not be able to reach with motorsports alone."

This winter the blue and red logo has already been visible in Hungary, Finland, Norway, Austria, China, South Korea, Canada, the Netherlands and the USA. 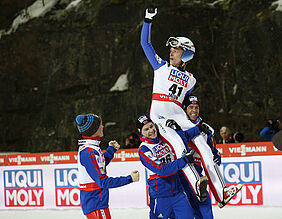