Closer than ever before. From 2 September, the German motor oil and additive producer will be giving away two exclusive tickets to MotoGP. LIQUI MOLY is sending two lucky people to an unforgettable week including a race weekend of the racing bike series. The winners will receive extraordinary insights behind the scenes of motorsport and the LIQUI MOLY Intact GP team. Under bestbrand.liqui-moly.com, fans in 146 countries can take part in the competition on the lubricant specialist’s social media channels. LIQUI MOLY would like to the participants to say which motor oil is used by all Moto2 and Moto3 racing bikes.

Tested in racing. Proven on the road.

Official motor oil of Moto2 and Moto3. LIQUI MOLY has been the exclusive supplier of the official motor oil for the Moto2 and Moto3 series since 2015. MotoGP is the most successful motorcycle racing series in the world. All 20 races each year are broadcast to more than 200 countries and are watched by a total of 280 million people each season.

All teams in these classes use LIQUI MOLY Motorbike 4T Synth 5W-40 Race. A product that meets all requirements. Not only at the races, but also on the road. 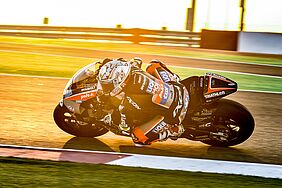