LIQUI MOLY extends its participation in MotoGP ahead of time

German oil manufacturer to remain in the racing series until 2020

October 2016 – The blue and red logo of LIQUI MOLY will continue to be visible in MotoGP for a while longer. The German oil manufacturer has extended its participation in the racing series ahead of time until the end of 2020. "This is our greatest investment in motor sports – and worth every euro" says Peter Baumann, Marketing Director at LIQUI MOLY. Add to this the good experiences of the Moto2 and Moto3 riders with LIQUI MOLY oil in their machines.

Since the 2015 season all the Moto2 and Moto3 motorbikes have been riding with LIQUI MOLY oil. "The feedback from the teams was exceptionally positive," says Peter Baumann. "That which proves itself in the extreme conditions of the race track also holds its own in everyday life." LIQUI MOLY has also been represented at the MotoGP circuits since 2015 with advertising banners.

This contract does not come to an end until the end of next year. Yet LIQUI MOLY is already extending its participation, worth millions, by a further three years until the end of 2020. "The first two years have shown how much the investment is worth it," says Peter Baumann. "The spectator figures are amazing, both at the racetrack and in the broadcasts. This ensures MotoGP makes an important contribution towards our brand becoming better known around the world."

Pau Serracanta, Managing Director / Commercial Area at Dorna Sports, the rights distributor of MotoGP, had this to say on the early contract extension: "We are proud to continue our relationship with a company such as LIQUI MOLY, who are a global player in providing one of the most important yet unseen aspects of top level competition. Another three years of partnership make Dorna and MotoGP proud to see the LIQUI MOLY name trackside at each event of the coming seasons."

Alongside its participation in the racing series, LIQUI MOLY is also the sponsor of the IntactGP team in Moto2, which takes part with the two riders Jonas Folger and Sandro Cortese. This participation is also being continued. 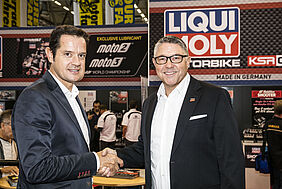