A classic on the rally scene and one of the toughest races in the world will once again inspire many motorsports fans around the world from 6 to 20 January: The Dakar Rally. Over 14 stages it covers the three countries of Peru, Bolivia and Argentina. A total of 332 vehicles will be starting Dakar 2018: 190 motorbikes and quads, 100 cars as well as 42 trucks. With 8,793 km the cars have to drive the longest total distance

It is a rally of extremes: On average, permanently around 4,000 meters above sea level. The Bolivian special stages, for example, go all the way up to 4,786 meters. The rally is a very special challenge for people and materials alike.

It goes without saying, therefore, that the expertise of Germany's most popular lubricant brand is relied on under such conditions. The South Racing team from Rüsselsheim will, once again, be equipped by LIQUI MOLY at Dakar 2018. Behind the wheel of the Ford Ranger are Thomas Ourednicek and co-pilot David Kripal. The two Czechs can look back on a very successful year: Amongst their achievements was winning the third largest rally in the world, the Morocco Desert Challenge. You can see several season highlights in the video.

The team is appropriately motivated and full of anticipation for Dakar 2018, powered by LIQUI MOLY! 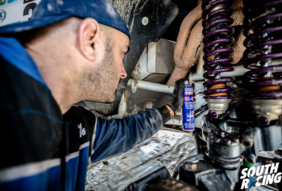