July 2016 – This problem arises particularly after shut-down periods: Diesel sludge. This is why the German motor oil and additive specialist LIQUI MOLY has also included additives in its marine line to stop and prevent formation of diesel sludge in the fuel tank. An external laboratory has now confirmed how well they work.

The Institute for Technical Microbiology, Dr. Jutta Höffler GmbH tested the LIQUI MOLY Marine Diesel Protection Additive as well as the Marine Diesel Bacteria Stop in various concentrations according to ASTM E 1259-05. For the test, diesel fuel was mixed with a small quantity of water and then infected with a certain quantity of microorganisms. Three typical microorganisms causing diesel sludge were selected: Bacteria (Pseudomonas aeruginosa), yeast (Yarrowia tropicalis) and fungus (Hormoconis resinae).

The results were the same for all three. While the microorganisms proliferated quickly in the untreated diesel fuel, the additives showed a quick-acting effect. After seven days no more microorganisms were detectable and they did not return even after 21 days. The test also indicated that both additives are highly effective even at low concentration.

Of the two products LIQUI MOLY Marine Diesel Bacteria Stop is the specialist. The additive provides a direct effect against microorganisms. In the case of high infestation, a concentration of 1:1000 is used. A concentration of 1:4000 is sufficient for prevention. The other product, LIQUI MOLY Marine Diesel Protect is a general additive. It also contains effective ingredients against microorganisms, however not in such a high concentration as Marine Diesel Bacteria Stop. However it also cleans the fuel system, protects it against corrosion and increases the Cetan number, so that the engine starts easier and runs smoother.

Diesel sludge is a wide-spread problem for boats. If water is present in the fuel tank, whether from water condensate on the inner walls of the tank or contaminated diesel fuel or carelessness when filling the tank, it deposits at the bottom of the tank. Microorganisms can propagate at the interface between the water and diesel fuel. The longer the shut-down period, the more they can proliferate. The form a slimy sludge, that clogs the fuel filter and injectors. The engine dies. Beyond that, the metabolic waste products produced by the microorganisms increase corrosion in the fuel tank and lines.

LIQUI MOLY Marine Diesel Protect and Marine Diesel Bacteria Stop both eradicate microorganisms. However they cannot dissolve the sludge produced by the microorganisms up to that time. In the event of high infestation, it is therefore always necessary to clean the fuel tank. Both additives can be used in low concentration to prevent this from happening in the first place. When used regularly, the problem of bacteria and fungus in the fuel tank never arises. The engine no longer poses any problems and the money for an expensive tank cleaning operation can also be saved. 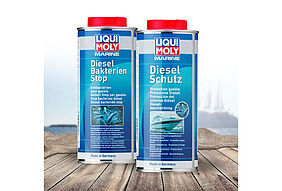