After the third and fourth runs of the TCR Middle East Series in Dubai, LIQUI MOLY Team Engstler led both the team and the driver standings.

As soon as qualifying 17-year-old Luca Engstler set the pace for the entire starting field with his VW Golf GTI TCR and took pole position.

His team colleague, Florian Thoma, had less reason to celebrate, as he was involved in an accident in qualifying. But Thoma did not let that put him off and his sights were immediately set on the first race.

Thoma started in seventh position and moved up two places. This meant he finished the first run in fifth place. Luca Engstler began the race in pole position and securely maintained that lead throughout the race. He extended his lead with each lap; after 14 laps he had a lead of several seconds.

Luca Engstler, LIQUI MOLY Team Engstler driver: "I don't know what to say. I'm more than happy, it couldn't have gone any better. Thanks to everyone who has supported me and to the team that always prepares my car so perfectly for the races. Great job! Thanks!"

In the second race, the first ten of the starting field began in reverse order. For Thoma this meant fifth position; Engstler had to start the race in tenth. Both drivers of LIQUI MOLY Team Engstler showed a strong performance with their Golf GTI TCR right from the start; Thoma was able to take the lead and took his first race victory in this series. Engstler went into the last round of the race in fifth place and was again able to make up two places. He was therefore once again on the podium.

According to Andreas Klinge, Team Manager of LIQUI MOLY Team Engstler/ TCR Middle East Series, the weekend was almost perfect. The team was able to win in both Dubai races and also get a third-place finish. This means that Luca Engstler now leads the championship with 89 points, with a 14-point gap over second place. Thoma is currently fourth in the driver standings.

Florian Thoma, LIQUI MOLY Team Engstler: "It was difficult, yet pretty easy. After the disappointment after qualifying I am now happy that I was able to show my entire potential in the races. Thank you to my great team."

The racing team from the Allgäu is also flying high in the team standings, where LIQUI MOLY Team Engstler has a 31-point advantage. With this success in the bag, it is now back off to Europe, with the next big challenge awaiting Luca Engstler in particular: He has his final school exams in May and therefore has to hit the books.

LIQUI MOLY Team Engstler will then travel to Bahrain for the final of the TCR Middle East Series, with the races taking place on February 24. 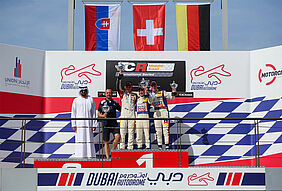