September 2016 – Outwardly, hydraulic oils do not seem very different, yet their working potential varies hugely. Only the highest performing oils receive the approval RDE 90235 by Bosch Rexroth. The German motor oil specialist LIQUI MOLY, with its new HyPER hydraulic oils, is the first of four manufacturers worldwide to meet this highest quality standard.

Over the past few years, operational pressure and power density in hydraulic systems have increased significantly, which in turn has increased the susceptibility to wear and premature failures. This is why the quality of the hydraulic oil has an ever-increasing effect on the service life and reliability of hydraulic systems. The lubricant specialist LIQUI MOLY is responsible for this development and has subjected its HyPER hydraulic oils to the toughest test: the Bosch Rexroth RDE 90235 test. All tested oils mastered the process with flying colors. They belong to the few in the world that fulfill the highest standard. 'The pump test introduced by Bosch Rexroth in 2015 goes far beyond that which the current DIN and ISO standards require,' explains Roland Schmidt, Director Business Development Construction and Industry at LIQUI MOLY. The problem with these standards: They do not keep up with technical developments that have taken place in hydraulic systems over the past few years.

With the RDE 90235 it is a scientifically standardized test procedure, which checks the behavior of the lubricants and the interplay in the key components hydraulic pump and motor under realistic working conditions. 'A test scenario completely oriented in practice,' says Roland Schmidt. 'Conventional tests work with 350 bar; the new standard uses up to 500 bar.' The previous approvals by Bosch Rexroth lose their validity and are replaced by the RDE 90235. Roland Schmidt: 'There's no getting around oils with the new approval for machines with Bosch Rexroth hydraulics.'

The HyPER hydraulic oil series by LIQUI MOLY comprises only oils that fulfill the highest valid standard. These lubricants contribute towards a longer service life of the hydraulic components because, for example, they reduce wear to the nonferrous metals and nitrate layer of pistons and bores. At the same time, they increase operational safety and minimize the risk of breakdowns. Their improved seal compatibility minimizes unsealed points of hose connections. Even the number of burst hoses is significantly reduced. Compared with conventional hydraulic oils, HyPER hydraulic oils generally allow change intervals that are twice as long. 'This leads to the significantly higher quality oil not simply offering significantly more technical benefits, but also being better-priced than conventional hydraulic oils,' says the LIQUI MOLY expert. 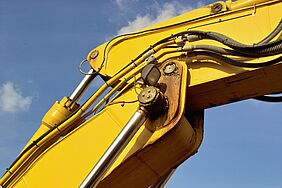